This Article was taken from Mountain Home and written by Roger Kingsley, you can view the article here at Mountain Home. 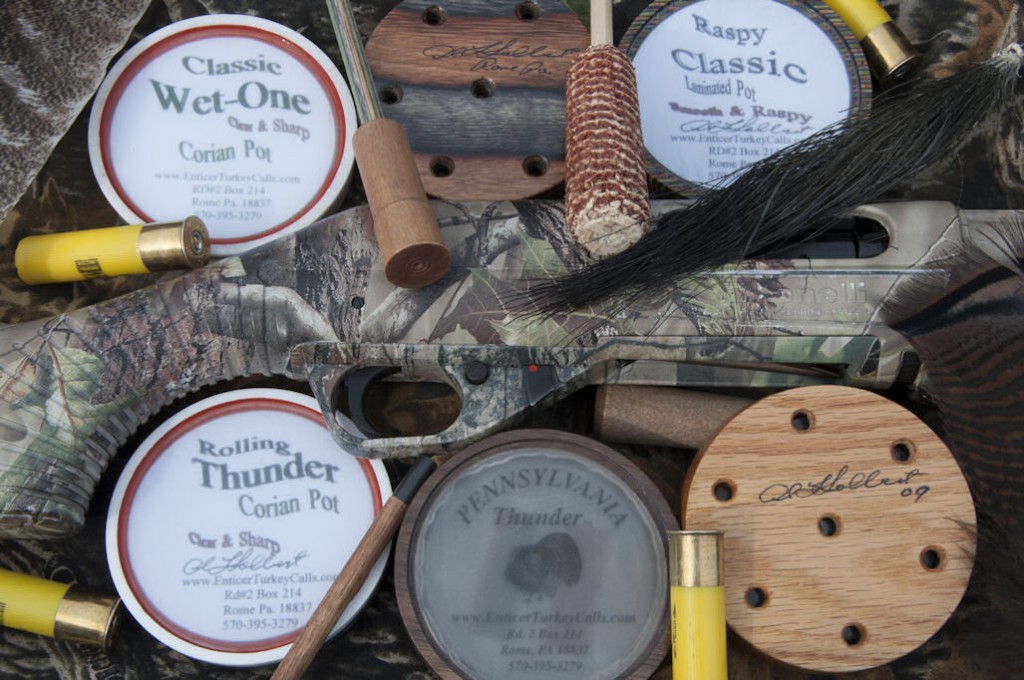 A sampling of the fronts and backsides of six calls that Al builds. They are a perfect partner for a well-tuned shotgun!

One day while reading Turkey Call magazine, I noticed an article about traveling turkey calls. Four custom-made calls were selected to be used by turkey hunters scattered across sixteen states. What was the point? Feedback! Those four turkey calls ended up crossing over 22,000 miles, which exposed them to a wide range of hunting climates and wild turkey sub-species.

One of the turkey calls chosen for that cross-country trip—named Pennsylvania Thunder—was made in Rome, Pennsylvania, located in eastern Bradford County. Since turkey hunting had recently become an obsession of mine, I dialed the number that was visible in the photograph of the call, and was soon talking to the call maker himself, Al Holbert. Al invited me to visit his workshop in Windham Township—which I gladly accepted—to not only see where, but learn how and why the Pennsylvania Thunder was built.

Al grew up in Northern Bradford County and attended Athens High School. Upon graduation, he enlisted in the United States Navy where he spent four years as a shipfitter. Returning home, Al landed a job at the Bendix Corporation in Elmira, New York, where he put in thirty-one years as a machinist. It was during those working years at Bendix that Al’s interest in turkey hunting blossomed. 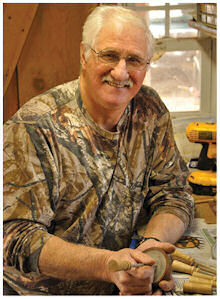 Al Holbert in his workshop in Windham Township, Bradford County.

His first sighting of wild turkeys happened in 1959 in Chemung County, New York—the year prior to his navy enlistment. Al was fascinated by the sight of those birds and the encounter left a permanent impression. In those days, the wild turkey’s long-established range in Pennsylvania consisted mostly of the south-central counties.

Because of the lack of wild turkeys at that time, it was rare to find a turkey call in a sporting goods store in these parts, and that sparked a desire for Al to create his own call. Years later, when he finally succeeded, Al started demonstrating his calls to co-workers, who eventually began waiting in the parking lot for him to show up because they wanted one, too. That’s because turkey populations were rapidly expanding, and with it an urge to hunt them.

A turkey call—for the uninformed—is an apparatus used to imitate the social vocalizations of the wild turkey. Emitting such sounds in a realistic manner tricks the birds to approach within range of whatever a hunter is armed with. There are many different call designs, but they fall into two categories: friction and air-activated.

At first, Al concentrated on perfecting his own style of mouth call. But after experimenting with other designs, he focused on the ambidexterity of friction calls. The downside to mouth calls is the heap of practice most people must undergo to achieve some level of proficiency.

Friction calls require hand movement to scrape something across an abrasive surface, and a specific design known as the pot-and-peg is what Al began building in the early 1980s. The pot holds the surface, which is the foundation for the sound, while the peg or striker controls a percentage of the volume and tone. If you desire a different tone, you can opt to change the pot or the peg.

A single species of wood—preferably dense or tight-grained—used to be the only practical base for a pot, but experimentation with other materials found that laminated woods and synthetics can be equal, if not superior, depending on who you ask. Regardless of the material, if it creates a sound that appeals to Al, he shapes it into a call. “But why so many models of the pot and peg?” I ask. “Different materials produce different tones,” Al explains, “which is why I make so many variations. Everybody likes something different.

“Some like walnut for its higher-pitched version, while others might prefer a mellow, raspier sound typical of black cherry. And their preference is usually based on whether it helped them tag a bird.”

“Turkeys—especially mature gobblers—are notorious for being overly suspicious,” says Al. “So I encourage hunters to master as many calls and sounds as possible to use under different circumstances. That’s because there’s no telling what a gobbler or hen will respond to on any given day. Stuffing your vest with a variety of calls will enable a hunter to quickly mix up the calling to sound like more than one bird, which might be the key to luring in a stubborn tom.”

Hardwoods like walnut, cherry, and oak are widely used for turkey calls and will never go out of style, but space-age synthetics, plastics, and composites have become commonplace. Corian is one such material. Created by Dupont, it’s used primarily for countertops because of its non-porous structure. The density of corian transmits superior acoustics. 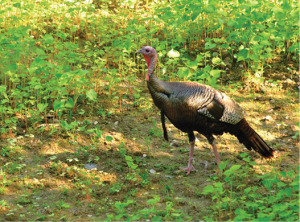 Turkeys are blessed with phenomenal vision…supposedly capable of seeing 300 degrees without moving their heads. Possessing such an ability puts predators and hunters at a great disadvantage.

Striking surfaces of pots are typically glass, aluminum, or slate. Slate is a hard, bluish-gray rock that has been used in turkey calls for decades. Al uses Pennsylvania slate and purchases it from the Big Bed Slate Company located in Slatington, Pennsylvania—a town named for its abundant, high-quality slate quarries.

Striking surfaces must be roughed up or sanded to prepare the call for the striker. A striker or peg can generally be made out of a wide variety of woods, even laminated, but plastic and other materials have hit the market thanks to creative thinkers. In recent years, carbon pegs matched against an aluminum or glass surface have become well-known for their ability to generate excellent turkey sounds even when wet.

Al hits the road every year to take part in shows,  such as the Eastern Sports and Outdoor Show in Harrisburg, and the PA Bow Hunters Festival in Forksville. “ENTICER TURKEY CALLS—The Calls Hunters Swear by…Not at!” is his sign. At his booths, Al points out to interested onlookers that he’s not a salesman. “I’m just showing you what I’ve got,” he explains. “The calls sell themselves and every one of them carries a lifetime guarantee.”

Al currently builds eighteen pot and peg calls, of which ten are part of his Wet Wonder Series, which specifies 100 percent waterproof.

His number one best seller is the Wet-One Classic, which is no surprise since it can be used rain or shine.

His most recent introductions, the Next Generation and Spring Tradition, feature the corian pots with an ingenious, adjustable sound chamber.

Personally, I love the beauty of a wood pot like the rich walnut of the Pennsylvania Thunder…but maybe I’ve been influenced by the way it coaxed in a twenty pounder for me one spring morning.

My acquaintance with this seventy-year-old Windham Township resident obviously revealed a man with an uncanny knowledge of the wild turkey and their vocalizations. That knowledge clearly shows in his finished products and demonstrations.

You can find Al Holbert’s custom-made turkey calls and accessories at his Web site www.enticerturkeycalls.com. Or, to speak with the builder himself, call him at (570) 395-3279.